View cart “Hairy Palmer’s Kiss” has been added to your cart. Winsor & Newton: Weasel Snatchers Extraordinaire
in “To Catch A Kolinsky”

This comic was born out of a real-life brush shortage. For over a year, Winsor & Newton sable brushes could not be bought anywhere. They were out-of-stock with most art-supply companies. This stemmed from some kind of a trade dispute, and I think U.S. Fish and Game was involved somehow; this is because sable (or “kolinsky sable”) is made from the tail of the kolinsky, or Red Weasel, found mostly in Russia. So, it had something to do both with an import item, and an import item that comes from a strange animal.

Since the kolinsky a Russian weasel, I decided to take a Spies Like Us sort of approach to the story, in which two Englishmen (Winsor and Newton, respectively), go off in search of these critters in order to solve the brush shortage. (Spoiler: it doesn’t go as planned.)

This is a silly comic and it never sold well; still, it’s among my favorite because it’s full of bad puns and was a lot of fun to draw.

There are no reviews yet. 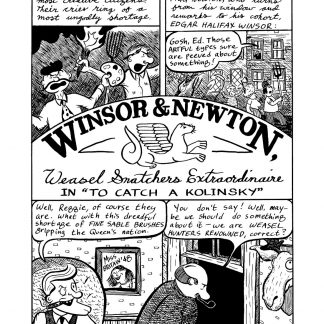